Everyone has a story. Some have stories that end up on the big screen. Mine doesn’t need to be there. I enjoy life – and work to get the most out of it. I am an eclectic mix of my past experiences and future dreams and desires.

I’m still not sure what I want to be when I grow up but I’m having fun along the way.

Keep reading to get a snapshot of my life and learn a little more about me. 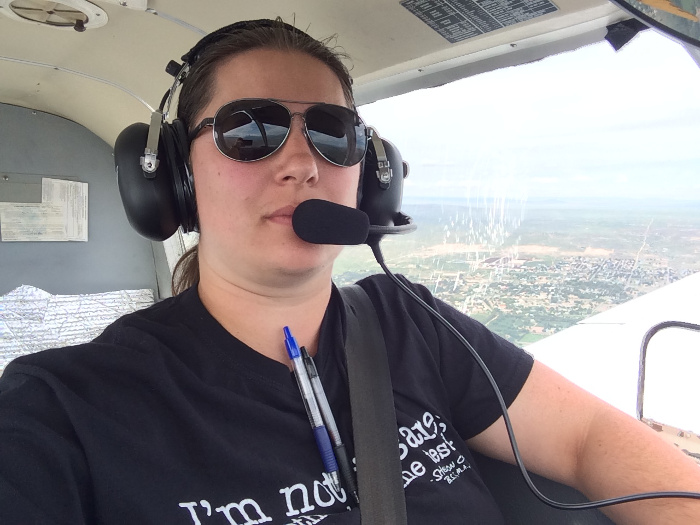 My story starts pretty much the moment I left high school. I thought I knew what I wanted. Thought I knew who I wanted to be and what I wanted to do with my life. I joined the Marines and shortly after that got hurt during boot camp on a long run and sent home. My dream of being in the military was crushed. My short life of 18 years was over. OVER I tell you.

After getting my head pulled out of my …. um, funk … I realized life wasn’t worth wasting away in my sorrow. So I picked myself up and started life as a real adult. I payed bills and had a job. Mind you, it was whatever odd job I could find. Staples stock person, Jiffy Lube Manager, Car Alarm Installer and even a breif stint as a Cashier at a Liquor store. I was living the life! Or so, that’s what everyone told me I was doing.

I went on an interview one day for Coca-Cola and thought this would change everything for me. Little did I know at the time but I was right, just not right in the way you might expect. I was looking for a job as a stock person again and when they saw that I had miliatry service (2 months, but hey, it’s service) on my application they asked to see my records, specifically my discharge papers and medical records.  Little did I know that the med records were none of their business but, since I didn’t have access to them I went to the only place I knew where to start looking for them…. the Marine recruiter’s office.

To make that long story shorter, I was on a bus several months later back at Paris Island for the second time in my life to finish what I started the first time. This time however, I did graduate. I earned the title United States Marine! 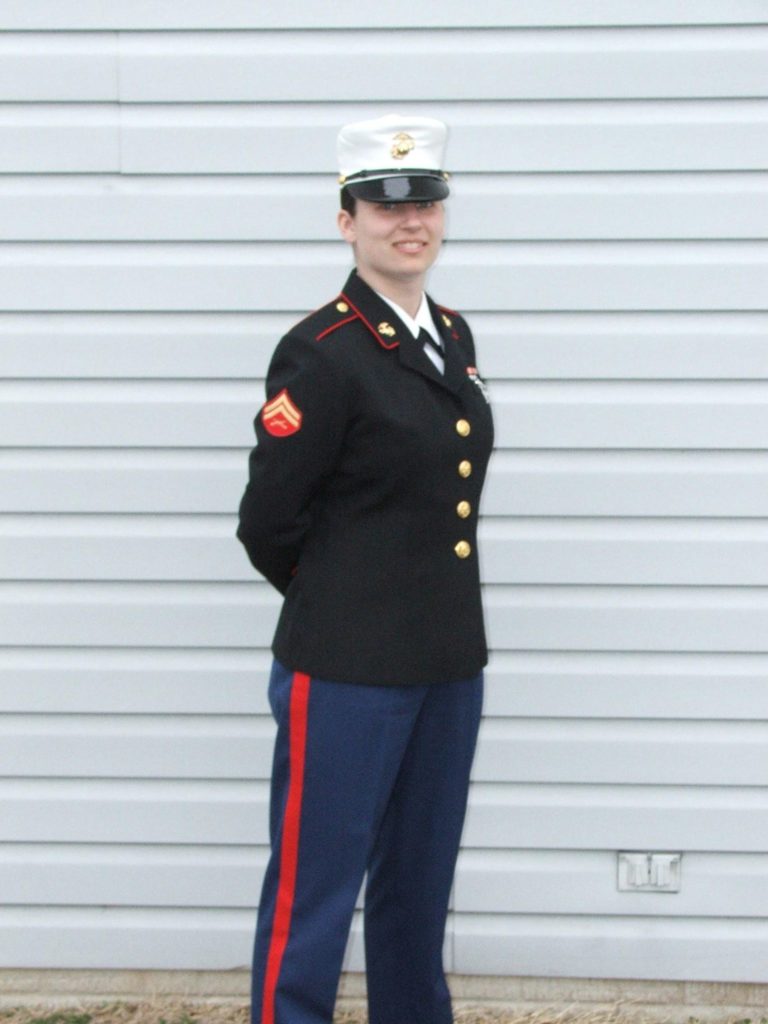 I served for 4 years and that’s where I learned to work on computers. Like anyone starting a new job, I started at the very bottom and was stuck at the help desk. After doing anything I could to get the attention of those around me so I could move up and learn more things we got this new machine in that was Unix based. No one knew what to do with it and I said try “ls -l” and the computer responded. From that point on I was the resident Unix expert and I finally got away from the help desk.

Meeting the Man of my Dreams 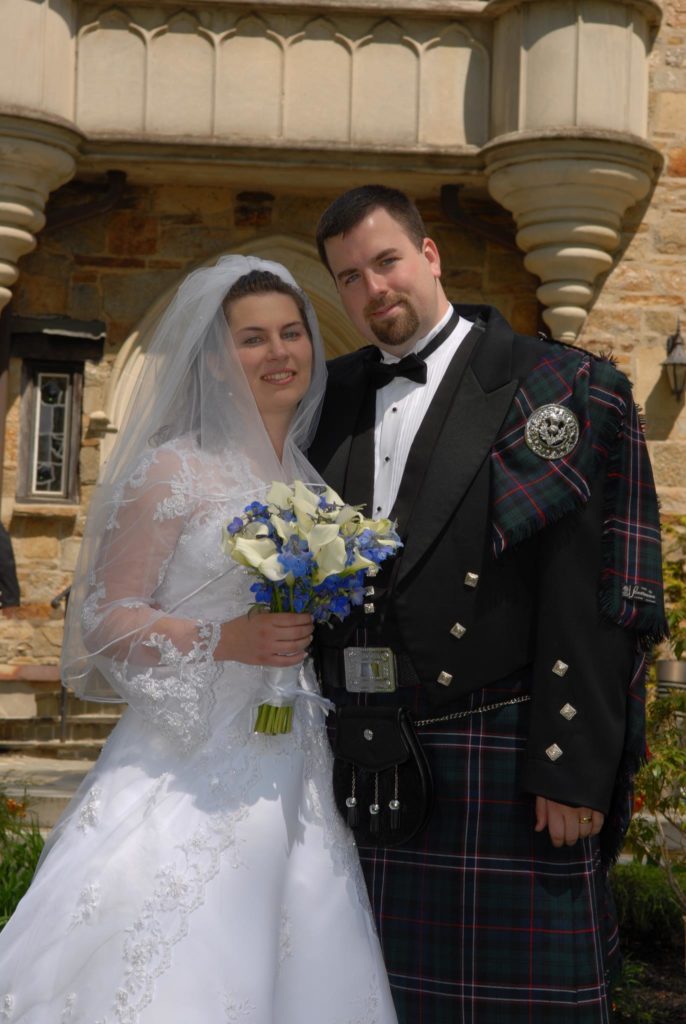 While in the Marines I met the man who later became my husband. Our relationship started off like most do. Young, in love and the world was ours. However, after about a year of dating the Marines did what they do best; I got orders to change my duty station.

Now, I need to back up a little here.  He’s a local businessman and can’t exactly pick up his business and move it. So naturally I was torn. What were my options? 1) Fight orders, on a contract I signed and up to this point fully devoted my life to; not likely to end well. 2) Leave the man I loved behind, again, not what I wanted. 3) Figure out how to take him with me. Since the military doesn’t take too kindly to declining orders, my then boyfriend and I had LOTs and I mean LOTs of fights. I’m wasn’t going away in a dating relationship since that rarely works, so…..

We were married very shortly after I got those orders, which, coincidentally were scrapped (after we tied the knot) and I served the rest of my military career in that location. Talk about a moment in time that the hubs and I still look back on and shake our heads over.

Life after the Marines

Once I got out I went back to work for the Marines for 3 more years as a civilian as a Unix/Linux systems engineer. This career path was proving fruitful for me. I was good at it, though in my heart it was not a passion. So naturally I decided to go back to college and get more educated in my current career path. I finished my degree in 2 years.  Those were the worst 2 years of my husband’s life! I was working full time, going to school full time and we had a brand new baby boy.  Talk about a man that’s a keeper, my husband was incredibly supportive of what I felt I needed to do.

When I graduated college my graduation present to myself was a beautiful Harley Davidson motorcycle. Hey, it takes a lot of work to keep a family going, work and get the grades needed to graduate with a Computer Science degree! I’ve had many adventures on the back of this baby. I’ll even write about the good ones in the future. 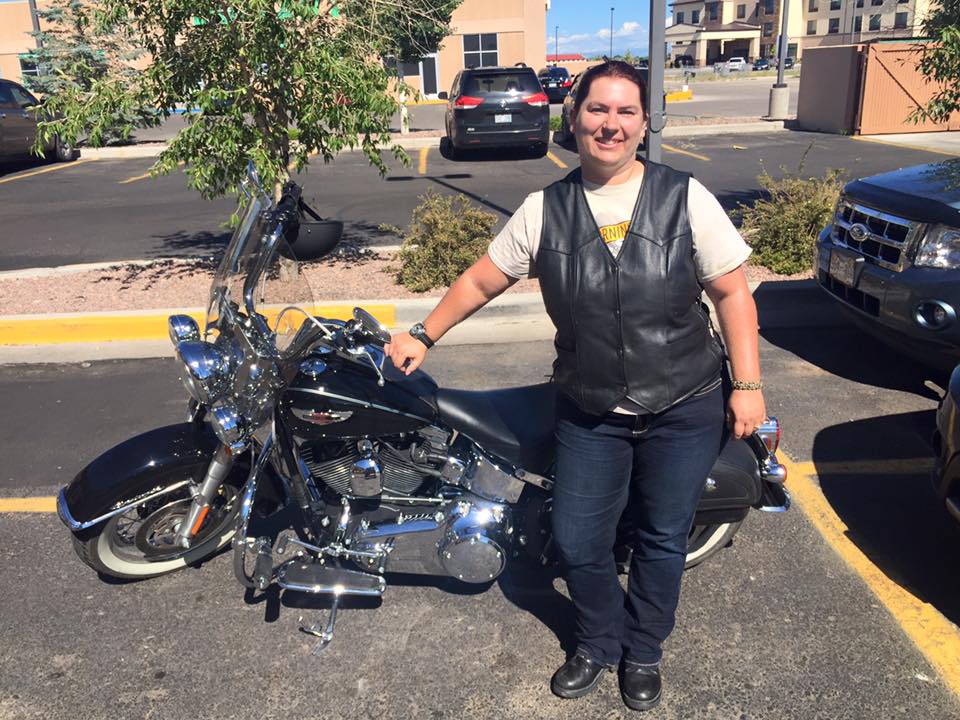 After I left the Marines all together I was working for a company doing High Performance storage set ups.  This was wicked cool but it was my loyalty to my word that kept me going into the office and doing what I was doing. I ended up working for the company that programmed the storage units for a few years but the contract I was supposed to be on never really was able to get off the ground.

Shortly after we moved out to New Mexico I was pregnant again. We were expecting another boy! He’s quite the handful and an amazing spirit so I’m fairly certain he’s the reason for a few extra grey hairs popping up on my head. My life was now fully devoted to raising two boys with my husband and working.

If you are still with me in my story I am now almost 10 years into my professional career. The proverbial ‘they’ say that 10 years of doing something makes you an expert. However, I still couldn’t figure out what I wanted to be when I grew up! I was working in a great career, had an amazing family and seemed to be missing something. 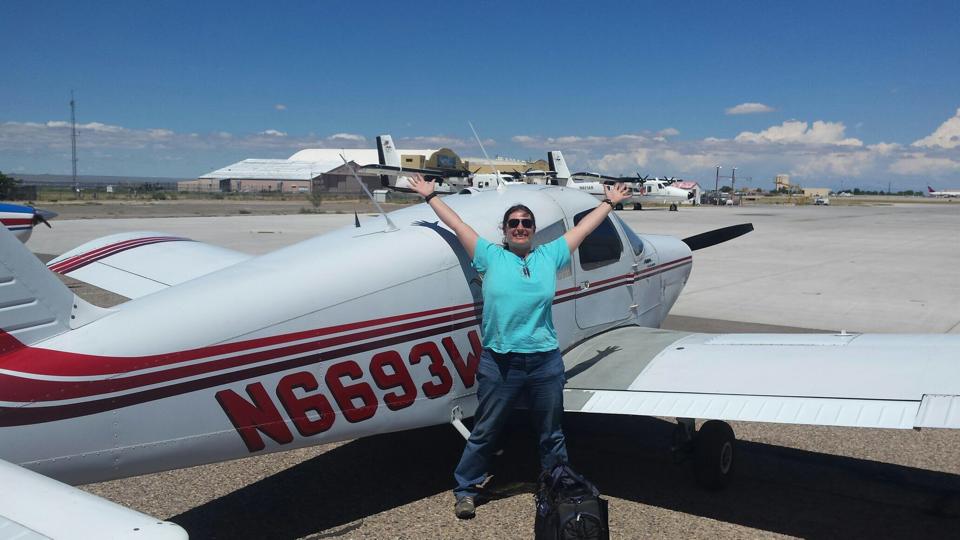 One day I woke up and decided I wanted to learn to fly a plane. I researched what it would look like to learn to fly, got my Class 3 medical (since everything said I had to have that to be a student) and called my local flight school to book my discovery flight.

After the discovery flight I immediately enrolled in lessons and pre-booked the next 2 weeks of lessons and flights. I went home to my husband and told him that we needed to figure out how to pay for flight lessons. We had some money in the bank and everything was set.

I was very consistent with my training and flying 2 days a week I had my license after 6 months and about 65 hours of flight time. You couldn’t have pulled me off cloud 9 if you shot me that day.

4 years later (and a very patient husband and 2 boys) I am still flying and building my hours with the ultimate goal of becoming a flight instructor. You can read about my flying adventures here.

As if my life couldn’t get any more eclectic than it already is… Marine, Computers, Wife, Mom, Biker, Pilot, Tea snob, Business Owner and other random things I stick my nose into … I’m now the proud keeper of a flock of chicken. 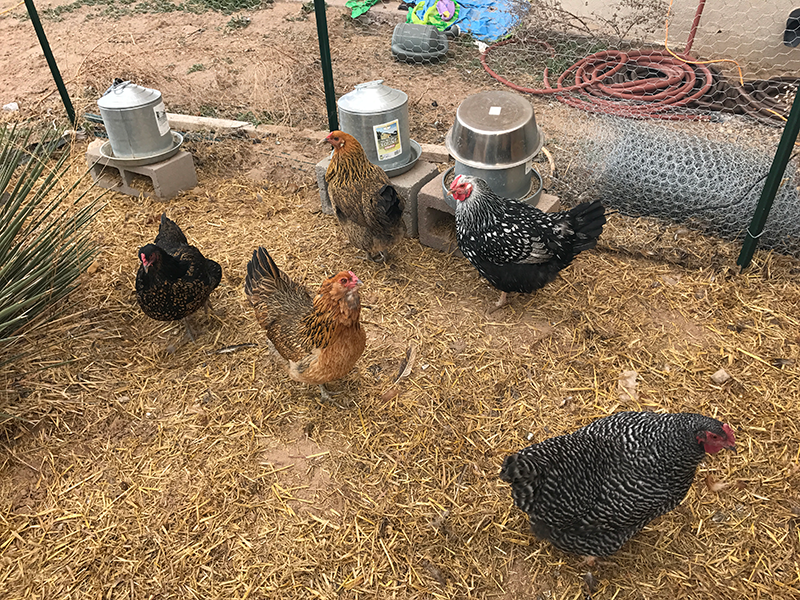 This is the original flock that I started with. They have since grown and I’m now up to 14 birds. I’ve gone through coop upgrades, tragic tales of dogs and birds, and dealing with sick birds and introducing new birds to the flock.

It’s probably the only way I’m going to add ‘estrogen’ to my house so I have to be sure to keep the balance of all the ‘boy-ness’ in my home.

So there you have it. An eclectic tale of my ‘not quite 40’ years. Adventure, lazyiness, farming, business, flying, riding, and family.

This is the unfinished story of my life. Thanks for reading.